xEAC (https://github.com/ewg118/xEAC), an open source, XForms-based framework for the creation and publication of EAC-CPF records (for archival authorities or scholarly prosopographies) is now ready for another round of testing. While xEAC is still under development, it is essentially production-ready for small-to-medium collections of authority records (less than 100,000).

xEAC handles the majority of the elements in the EAC-CPF schema, with particular focus on enhancing controlled vocabulary with external linked open data systems and the semantic linking of relations between entities. The following LOD lookup mechanisms are supported:


xEAC supports transformation of EAC-CPF into a rudimentary form of three different RDF models and posting data into an RDF triplestore by optionally connecting the system to a SPARQL endpoint. Additionally, EADitor (https://github.com/ewg118/eaditor), an open source framework for EAD finding aid creation and publication can hook into a xEAC installation for controlled vocabulary as well as posting to a triplestore, making it possible to link archival authorities and content through LOD methodologies.

More information:
Posted by Ethan Gruber at 12:14 PM No comments: 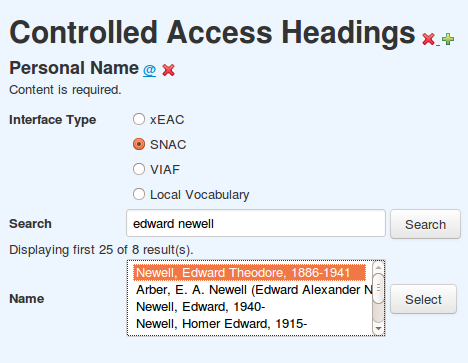 SNAC URIs that are embedded into EAD finding aids (like the URIs from other linked open data vocabulary systems) will be included in the RDF serialization of the archival collection data. This may pave the way for users of EADitor to make their content accessible through SNAC, or whatever international archival entity system evolves from SNAC, by means of linked open data technologies.
Posted by Ethan Gruber at 7:12 AM No comments: