The first of several dozen digitized Greek coin hoard research notebooks written by Edward Newell has been published into the newly-relaunched ANS archival resource, Archer. This is the first publicly-accessible product from a grant of $7,500 received from The Gladys Krieble Delmas Foundation to digitize these valuable resources. This notebook, written in 1939, includes notes on a handful of Greek coin hoards which were eventually published in An Inventory of Greek Coin Hoards (IGCH).

We wanted to go beyond simply scanning page images and offering each notebook as an open access PDF. We wanted to include zoomable images, basic pagination functionality, and annotation of particular items on each page. We decided not to go as far as to offer full transcriptions, but the annotations could include free text or links to other resources on the web: such as linking to coins in the ANS collection, contemporary scholars mentioned in the text that might have entries in VIAF or dbpedia, linking to nomisma.org defined IGCH entries and other identifiers for mints, regions, or numismatic authorities, books in the ANS library, and place names in Geonames. Furthermore, these terms should be indexed into Solr and populate the facet terms in Archer's browse interface, and RDF should be made available for linking resources together.

We chose TEI XML as the vessel for encoding data about the notebooks. The TEI files include bibliographic metadata in the header and a list of facsimile elements that link to page images and contain xy coordinates for the annotations. The elements also include multiple surface elements for each annotation, with mixed content of free text and links. We have hooked into Rainer Simon's Annotorious library in both the public user interface and the XForms-based backend. Both interfaces are now part of EADitor's core functionality.

It should be stressed that the TEI editing functionality in EADitor is tailored toward annotation of facsimile images. The header is not yet editable, nor is the body, but this functionality may be enhanced in the future. Nevertheless, when you open the TEI form, there is a Facsimiles tab. In this tab are two columns. On the left is a list of thumbnails. Clicking on a thumbnail will load the large image into OpenLayers and make it annotatable through Annotorious. 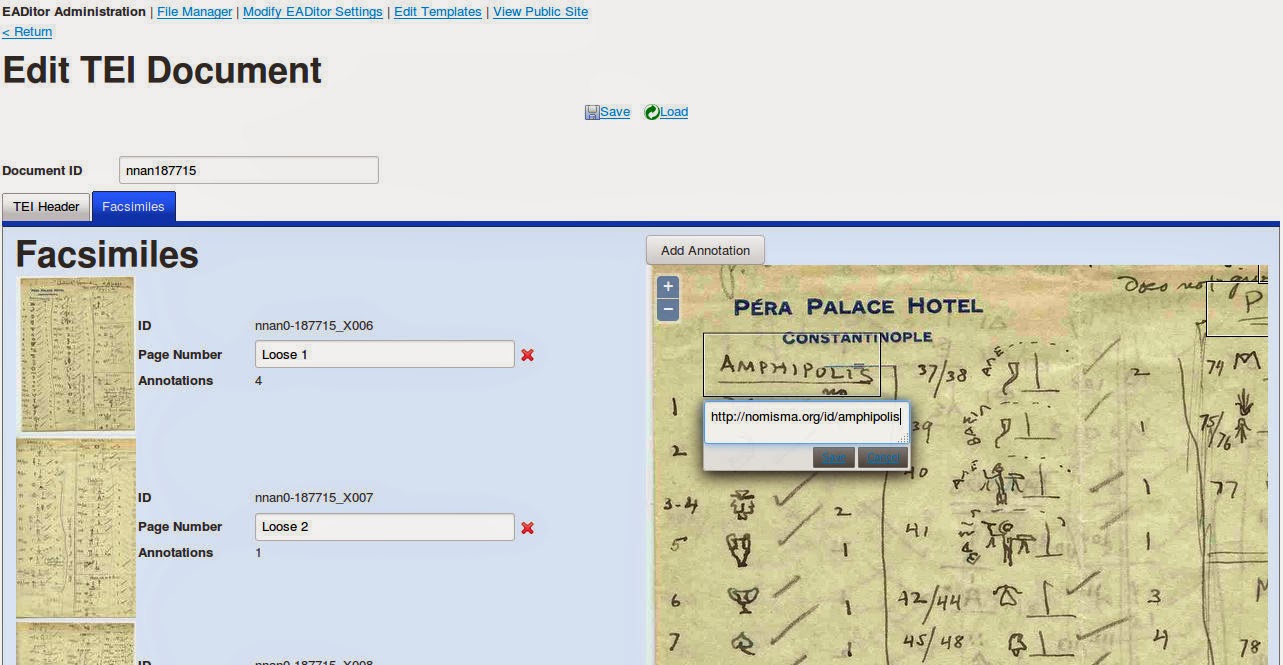 The JSON generated by Annotorious gets parsed by Orbeon (the XForms processor) and transformed into TEI and inserted into the XML document (not just the text annotations, but annotation coordinate values crosswalked into TEI attributes).

URIs are parsed and made into TEI "ref" elements. The label of the element may be extracted from an API, depending on the content of the URI. For example, a URI matching "http://numismatics.org/collection" will append ".xml," and the title will be pulled from the NUDS/XML serialization. Similarly, an AACR2-conformant place name label will be generated from querying Geonames' APIs and RDF is pulled from nomisma.org, dbpedia, or VIAF to extract the skos:prefLabel or rdfs:label (see more with the XPL and XSLT). 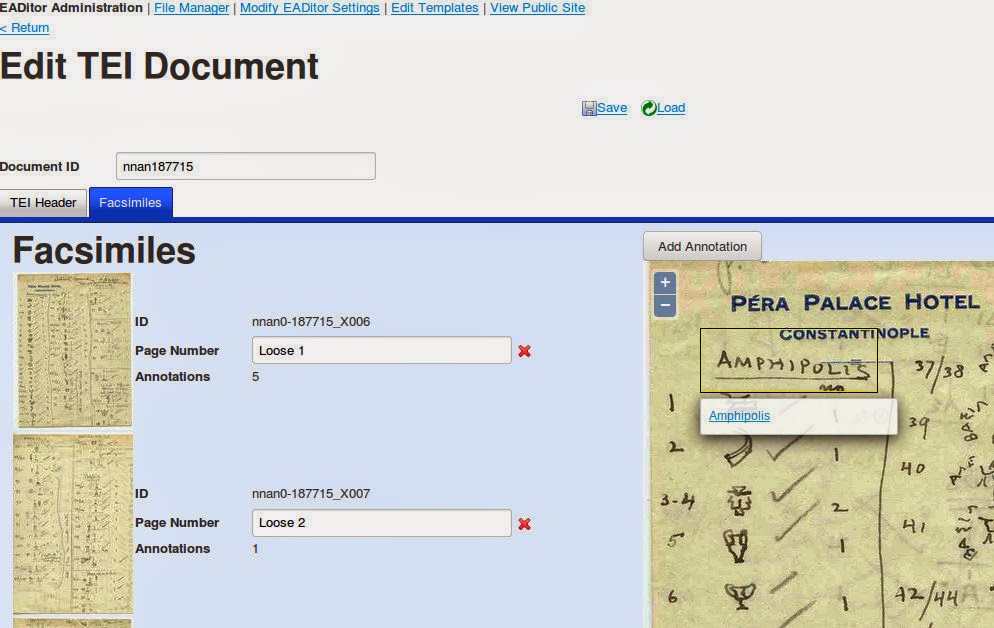 Once a new annotation is created and URL is parsed, the link will be clickable. When you click on a different thumbnail in the left-hand column to load another image for annotation, the TEI file will be saved to eXist, and the document will be re-published to Solr, if it had previously been designated as public, and re-published to the RDF triplestore, if the TEI document is both public and EADitor's config contains endpoint URLs for updating and posting data.

Since the EAC-CPF based authority records delivered through xEAC and Archer are now both hooked into an RDF triplestore and SPARQL endpoint, the notebooks will appear under the list of related resources in the Newell authority record, together with finding aids (encoded in EAD) in which Newell is a creator or correspondent or photographs (encoded in MODS) in which he appears.

The interface for the notebook itself  is not markedly different than for other record types in EADitor. In the right column is OpenLayers+Annotorious (in read-only mode) for showing images and annotations. The annotations are rendered by querying a REST protocol inherent to EADitor which transforms the TEI facsimile element into Annotorious' JSON model by passing in a few request parameters. Images can be paged through by clicking on thumbnails, next/previous links, or a drop down menu. 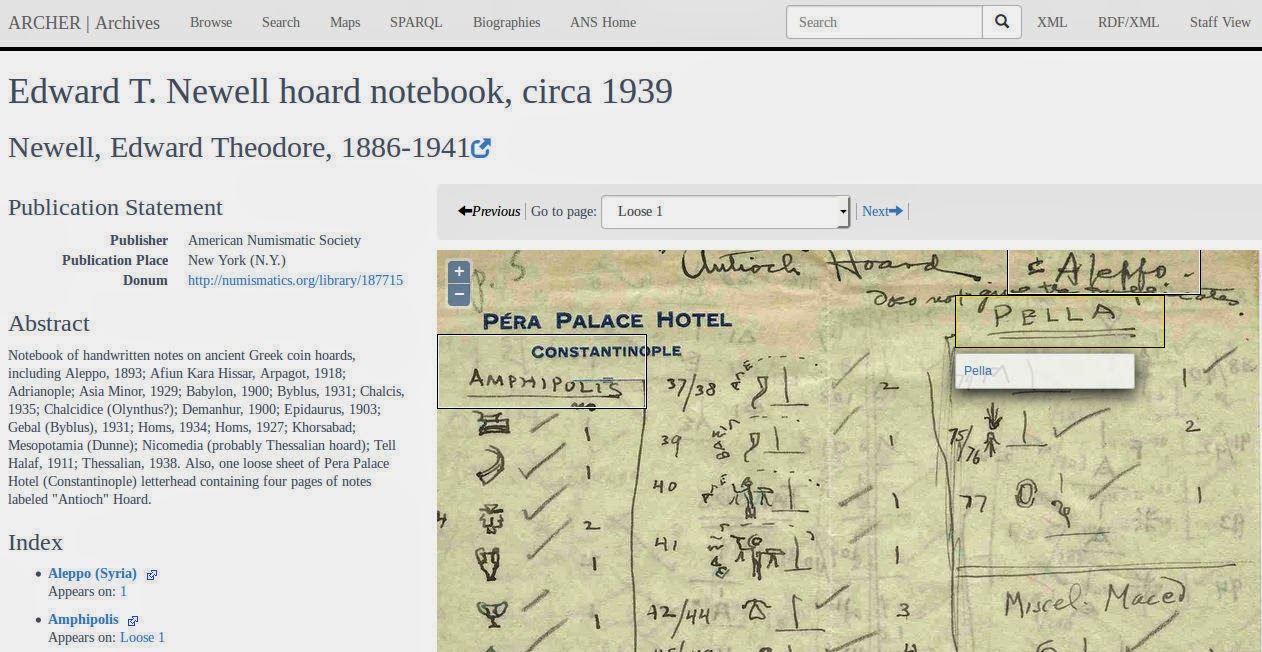 In the left column is bibliographic metadata and a list of unique terms that appear in the TEI document. The terms are clickable links to direct the user to the results page for that term's query. A user may click on the external link image to load the target URL (for example, to view the VIAF or Geonames page). Lastly, under each term are page numbers on which the term appears in the document. Clicking on one of these page number links will load the image and annotations in OpenLayers.

There are still some more improvements to make with the system, especially in making the TEI Header editable, but I think that this framework has really great potential for lowering the barriers to creating, editing, and publishing TEI, especially in a large scale linked open data system.
Posted by Ethan Gruber at 1:08 PM No comments:

I have spent much of the last two weeks working on deploying the newest version of EADitor and xEAC into production for version of of Archer, the Archives of the American Numismatic Society. As mentioned in earlier blog posts, EADitor has been hooked up to xEAC for personal, corporate, and family name lookups. Furthermore, both applications will serialize data into RDF and post into a triplestore to further connect archival content with authorities. EADitor supports the publication of MODS records in addition to EAD finding aids (although there is no editing form for MODS as of yet), and we will be publishing our first TEI files in the coming weeks (annotated facsimiles from the Greek numismatic research notebooks of Edward T. Newell).

I first needed to parse out all of the personal and corporate names from the EAD finding aids in order to remove duplicate entities with slight variations in name form (because the earliest finding aids were created with an earlier version of EADitor that used an inconsistent autosuggest feature). The origination element contained only plain text, so these needed to be matched with the normalized personal or corporate names to insert corpname or persname elements. Furthermore, the MODS records needed to be reprocessed because all terms were categorized as subjects, regardless of whether they were indeed subject topics or genres, people, corporate bodies, etc.

The personal or corporate names that appeared in the EAD origination formed the basis for the new EAC-CPF collection. The EAD and MODS files were updated to point to the newly minted URIs for these entities, and matches to VIAF URIs were made for many of the other personal or corporate names that appear in the controlled access headings in the finding aids or in the subject terms in the MODS records.

After generating more than 100 EAC-CPF stubs (which included a biogHist extracted from the EAD), I went through the list of biographies of prominent members of the ANS on the website, filling in gaps as necessary. I added images into the EAC-CPF record, where applicable, designated as resource relations with an xlink:arcole of foaf:depiction, which is defined as a semantic localTypeDeclaration in the EAC-CPF control element. The namespace for foaf: is defined in the declaration, making it possible to include a foaf:depiction in the RDF serialization (see http://numismatics.org/authority/anthon.rdf). I also inserted some CPF relations as necessary, either internally or externally to entities defined by VIAF URIs. Finally, I added a plethora of occupations (with dates and places, if known)--most of which were looked up from the Getty AAT SPARQL endpoint through xEAC--, life events, and associated places (looked up from the Geonames API in xEAC). I'm looking forward to leveraging the VIAF URIs stored in the EAC records in order to generate lists of monographs or journal articles by or about entities, pulled from Worldcat's APIs.

All in all, it is a fairly comprehensive and powerful research tool, even if there are only fewer than 150 entities in the system. Because the authority records and the archival resources are pushed into the RDF triplestore upon publication, a researcher can gain access to contents from an authority record. A user viewing a finding aid can view an abstract dynamically extracted from the EAC-CPF record for the creator of the archival content.

I believe I inserted just enough places and chronological events to make the map and timeline an adequate demonstration of geotemporal visualization for most EAC-CPF records. Certainly, we could spend more time enhancing the biographical context of each record. We will begin this process, and the records will continue to evolve. The user interface will continue to evolve as well, as I aim to introduce social network graph visualizations based on SPARQL queries, and I will create an XQuery interface to accompany the SPARQL endpoint interface to facilitate a wider variety of complex queries.

There are no firm ontology or data model standards for linked open archival description, so the RDF model used in this interface should be considered to be a beta, and it will be adapted when stronger standards emerge from the archival community. The system is beyond a proof of concept at this phase, but it has not been tested for larger scale implementation. I believe that the system can accommodate hundreds of thousands (even into the low millions) of EAC-CPF records and many millions of triples, but I have yet to test at this scale. In any case, I believe that this more modularized/linked approach to archival collections represents the direction of digital archives, or more broadly, cultural heritage materials.

Look for a more official announcement in the near future, probably after we publish a few annotated TEI-based notebooks from the Newell project, which we received modest funding to digitize last year.
Posted by Ethan Gruber at 1:30 PM No comments: