A Brief Description of Recent Updates

The American Numismatic Society's finding aid collection (an ANS implementation of EADitor) is tentatively set to be released in late October, and I am planning a major release of the EADitor general distribution beta to coincide with this event.  Over the last few weeks, I have been making some improvements to the code, several of which I will discuss briefly in this post.  A number of these improvements have been borrowed from Numishare, which is our software for managing and publishing collections of coins and similar objects.  Like EADitor, Numishare's back-end is built on top of XForms and the server-side XForms processor, Orbeon, so much of the code is interchangeable.

The list:
There aren't many more improvements or features that I would like to make to the code before the next major release in several weeks, but I would like to begin writing documentation for use and testing with Fedora repositories. 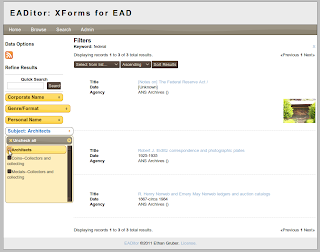 Screenshot showing "sunny" jQuery UI theme and a thumbnail served from flickr.  The banner text "EADitor: XForms for EAD" is stored in the configuration file and editable in the admin section.
Posted by Ethan Gruber at 12:37 PM 7 comments: