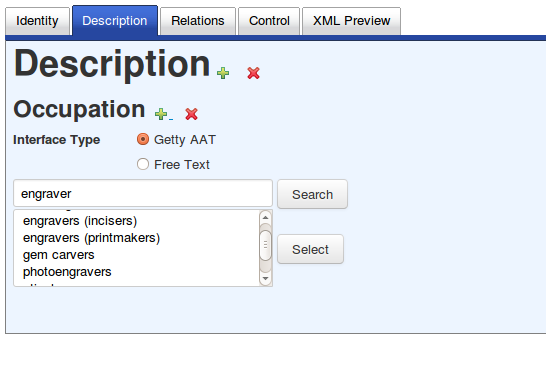 I won't go into great detail about how this works in the back end, because it is basically identical to the process by which I hooked EADitor into the AAT with EAD genreform elements, which I covered in a blog post last month.

One thing to note, however, is that the xEAC occupation lookup filters for terms that contain "Agents Facet" in the gvp:parentStringAbbrev property. There are different categories of terms--object types, agents, stylistic periods, etc.--that are not semantically distinguished, but at least contain a string in a generic field which allows filtering. I hope that the Getty will move forward with a more formal representation of these facets to improve querying efficiency.


I plan to apply these filters to the LOD thesaurus editor for kerameikos.org in order to provide a more accurate list of style periods, pottery techniques, wares, and shapes for linking kerameikos URIs to Getty AAT identifiers. For example, "Black Figure" is defined by the Getty as both a technique and a style or period, so "Black Figure" on kerameikos, defined by http://kerameikos.org/ontology#Technique, should refer to the Getty's technique facet (not the style or period) for the term with owl:sameAs.
Posted by Ethan Gruber at 9:01 AM