Like occupations, the function element in EAC-CPF has also been hooked into the Getty AAT via XForms-based SPARQL queries. The top concept for the function facet in the AAT is http://vocab.getty.edu/aat/300054593. According to Kathleen Roe on the EAD listserv:

The Getty functions vocabulary was built from an analysis of government functions in the U.S. as part of the Government Records Description project (early 1990s) undertaken by 12 or so state archives, including Utah (Jeff Johnson was the state archivist at the time).


The query appears as follows:

I extended these functionalities to EADitor, with the code practically copied and pasted from the genreform XBL into the function and occupation components (just replacing genreform with occupation/function and updating the SPARQL query). EADitor now supports lookup mechanisms for the following controlled access terms: 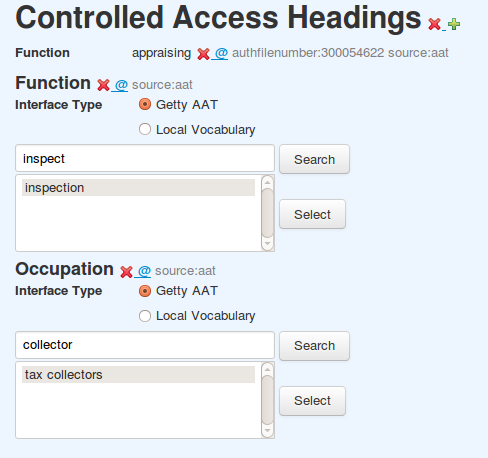 EADitor will eventually hook into SNAC (or whatever evolves from it) for persname, corpname, and famname, and I will extend it to hook into xEAC for linking finding aids with EAC-CPF records. xEAC already has a REST query mechanism that returns results in the form of Atom XML, so this will be pretty easy.
Posted by Ethan Gruber at 11:27 AM